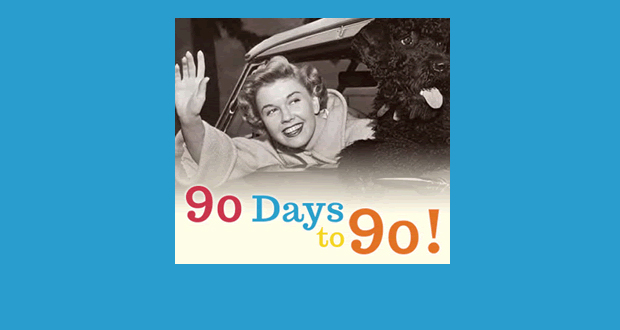 Legendary performer and animal welfare advocate Doris Day will reach a milestone on April 3rd — her 90th birthday.  Her Doris Day Animal Foundation has planned an already sold-out birthday fundraising celebration in Carmel, located primarily at Day’s Cypress Inn, to benefit the Doris Day Animal Foundation (DDAF), Day’s namesake charity.  DDAF has been Day’s continuing passion since she stepped out of the Hollywood limelight in the late 1970s.

The special birthday weekend includes a hotel stay package; a “Doggie Fashion Show” and adoption event in conjunction with the Monterey SPCA; a book signing celebrating the publication of “Doris Days’ Best Friends”; live entertainment; and a tribute dinner. The dinner will feature an auction of Doris Day-autographed memorabilia, as well as signed items from many of Day’s celebrity friends including Sir Paul McCartney, Tony Bennett and more.  All auction proceeds will benefit the DDAF. “I’m all about the four-leggers,” Day said, noting that she’s not much for celebrating birthdays. In lieu of cards and gifts, Day said she would love nothing more than if fans, friends and supporters would go online to www.DDAF.org and make a donation in her honor.

“Turning 90 is a milestone, for me and for the Foundation, and we’re setting a goal of $90,000 in donations,” Day said from her Carmel home.   “There is so much work still to do to rescue animals, and to inform people about the importance of spaying and neutering their pets,” Day said.  “We’ve made lots of progress, but there’s never an end to our work, and every little bit helps!”

Doris also issued a timely statement offering thanks and congratulations to the several Sochi Olympic athletes who rescued stray dogs, an issue that received much media attention during the Games.  “When I learned that our Olympic athletes were rescuing dogs from the streets of Russia, I was overwhelmed, and it literally brought me to tears. It showed that these young Americans not only cared about winning medals but also about saving the lives of these precious animals that are so dear to us. These athletes have strong bodies and caring hearts:  It’s a real testimony to the character of these young Americans.”

For those wishing to celebrate Ms. Day’s birthday, but who are unable to attend the celebrations in Carmel, the DDAF will be hosting an online auction to benefit the charity. Supporters can place their bids by visiting www.bluetreemarketing.com/dorisdayanimalfoundation. Both the online and live auction will include an array of exclusive pieces including: a Sir Paul McCartney signed “Wings Over America” box set; a Stella McCartney Falabella bag, a favorite worn by the women of Hollywood; and a Tony Bennett signed lithograph of Ella Fitzgerald and giclée of the Golden Gate Bridge. Other items include a Turner Classic Movies Gift Basket, a Bear Family Doris Day Boxed Set, a Warner Bros. Gift Package, and an authentic handbag and scarf from Doris Day’s personal wardrobe. To further thank the auction winners for their support of the Doris Day Animal Foundation, each of the auctioned items will include a personalized note signed by Doris herself.

Longtime celebrity friends and fans of Doris Day including Tony Bennett, Betty White, Olivia Newton-John, Dick Van Dyke and many more have captured surprise Happy Birthday video wishes for Doris, also encouraging donations for the Foundation.  These shout-outs and many more will be showcased the week leading up to Doris’s special day via a variety of media outlets.

Doris Day fans and DDAF supporters will also be able to sign an online 90th Birthday Card to Doris on April 3, by visiting the Foundation website.  For more information about all the birthday festivities, please visit www.DDAF.org.