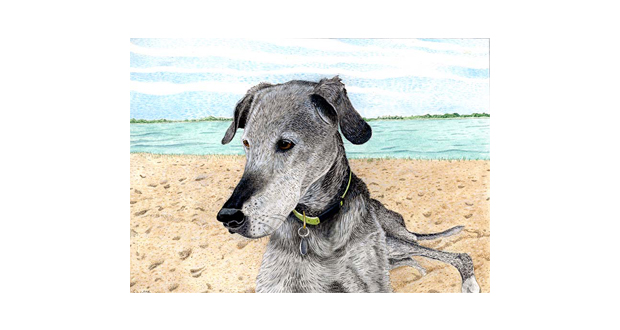 A Painted Pet: The Finished Portrait

This is the fifth and final installment in a series documenting Ollie’s portrait process.

Nearly 14 years after I first contemplated commissioning a portrait of my first fur baby Ollie and now it’s finally complete. To be clear, the actual portrait process took less than two weeks. It just took me that long to place the order. Todd Belcher, of Jimmydog Design Group, led me through the process step-by-step and I couldn’t be any happier with the final result.

It’s an amazing feeling seeing the finished portrait and knowing I now have this beautiful, custom work of art of my first real love. For those of you that have been following this series since the beginning, I hope you have a better understanding of the process and are ready to honor your fur baby in the same way.

To the right is the photo I provided to the artist and above is the final portrait. I think the work speaks for itself. Todd has done many pet portraits throughout the years so I thought I’d use this final installment of the series to let him share some of his favorites with you. I especially like this painting because of it’s contrasting colors and textures. The stark contrast of the black dog with the bright colors of the chair made for a powerful image. The closeness of the dog and rabbit to the viewer gives it a feel of intimacy. The parallel lines of the chair and cloth give the work a rhythmic energy. This is a painting of my dogs Freddie and Joey (left) with their friend Tango. They are in the back of a pickup truck getting ready to go to the lake. I like the excitement of the scene which is conveyed through the use of angles, the energetic brushstrokes and, of course, the expressions on the dogs’ faces. They knew exactly where they were headed that day and you can see that joy reflected in their eyes. This is one of my favorite paintings done from multiple photographs. The painting was a gift and all the photos of the dogs were taken inside. The client wanted a lake scene as the recipient spent lots of time at the lake with his dogs. There were four photographs in total. One for the background and three for the dogs. I arranged the dogs in such a way to complement the perspective of the pier. Shadows were used to “ground” the images of the dog on the surface of the dock. I and the client were very happy with the end result as you would never know that it was composited from so many different sources. One thing that makes this painting memorable is the poor quality of the photo. The animal had passed away and the only photo they could supply was an old, poor-quality Polaroid. The cat only comprised about one-fourth of the photo and was perched on top of what appeared to be an old water heater. I am very satisfied with the final image after much focusing in on the essential parts of the photograph. The car’s jewelry is also as interesting as the cat itself. The client was so happy with the final result as it gave her a wonderful keepsake of her beloved cat long after she was gone.

Win a pet portrait! Dog Living and Jimmydog Pet Portraits are teaming up to give two lucky winners custom portraits of their pets by renowned artist Todd Belcher. To enter, “Like” Jimmydog’s Facebook page and post a favorite photo of your pet, along with why you’d like to win a portrait. Visitors to Jimmydog’s page will vote on which photo they like best. The winner will receive an 11”x14” Grand Prize portrait. The runner-up will receive an 8”x10” portrait. Submit your photo by May 16. Winners will be announced May 21. Enter now! (The portrait prizes includes the image of one pet; additional pets can be included for $75 each.)