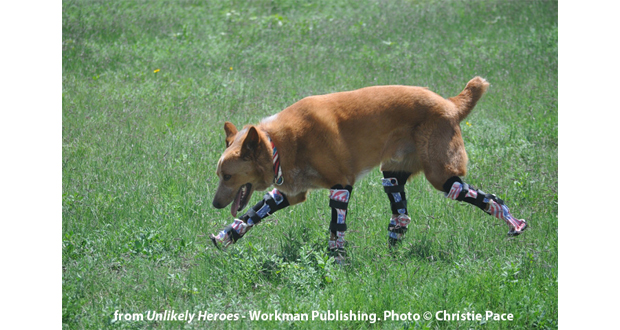 In Unlikely Heroes, Jennifer Holland uncovers and celebrates yet another side of animals that we often think belongs primarily to people—heroism, that indefinable quality of going above and beyond, often for altruistic reasons, often at great personal risk. These 37 inspiring true tales show animals whose quick acts have saved lives, like the pod of dolphins who protected swimmers in New Zealand from a great white shark by forming a screen around them. There are stories of animals who simply and unselfishly give, like Rojo the llama, who shines his very special light of lovingkindness on the elderly patients in an Oregon rehab center.

And there are compelling stories of heroic resilience: like Naki’o, the abandoned puppy who lost all four paws to frostbite but found the grit not only to overcome that terrible hardship but to reclaim the joy of life—that’s him, smiling on the cover of the book.

“There’s a bit of magic in everything, and some loss to even things out.” It’s a line from a Lou Reed song, and it makes me think about a sweet pup named Naki’o. In Naki’o’s case, first came a lot of loss, then just the right amount of magic. Loss returned briefly, then the magic swooped back in. And through it all, this dog held on to his joyous—and yes, heroic—spirit.

As a tiny puppy back in 2010, Naki’o was discovered with his family in the ice-cold basement of a Nebraska home. The owners had fled foreclosure, and their dog was left behind either pregnant or having recently given birth. The mama didn’t survive, but when rescuers arrived they found her puppies—red heeler mixed breeds—miraculously still alive and squirming. One of them, though, was in very rough shape, severely frostbitten, his paws held fast to a frozen puddle on the basement floor.

All four feet had to be amputated to save this little dog’s life. For an animal built to run and play, such a loss could have been devastating, and might have made the dog undesirable to potential adoptive parents. But then came the first spark of magic. Christie Pace was scrolling through a pet-finding website when she came across Stubby (as he was then known) and his sad story. “That day, I was really just perusing to get an idea of what kind of dog I might want to adopt, not to actually pick one.” But when she saw the photo and read Stubby’s history, “I fell in love. I went to see him, and he was all smiles, running on his little stumps and jumping into my lap to kiss me.” The dog had also lost a bit of his tail, a nip of nose, and a chunk of ear from the frostbite, but somehow these scars added to his charm. “Of course,” says Christie, “I brought him home.”

That Stubby was a special-needs dog didn’t worry Christie, who was a veterinary technician and was allowed to take him to work with her each day. Plus, he was so joyful, so seemingly unaware of his missing feet and able to maneuver pretty darn well without them. One leg was worse than the others and Christie thought she might have to address it down the line. But for the time being, both she and the dog managed.

As Stubby—whom Christie renamed Naki’o, meaning “puddle” in Hawaiian—grew and his bones took shape, he began to struggle with his disability. (The dog’s new name reflected his owner’s birthplace, the cause of the pup’s injuries, and his “mistakes” during house training.) He also got heavier. “I had to carry him everywhere, put him in the car, help him up the steps,“ Christie says. “We couldn’t really take a walk, and if he was out to play he had to stay on the soft grass. Carrying him was fine when he was little, but by the time he was fifty pounds, it was pretty difficult!” Christie used a stroller and a red wagon to help cart the pup around, but it was slow going. “He didn’t like to be left at home. He wanted to be involved with the family all the time.”

Still, “he never complained,” Christie marvels. “His personality was still great, he was always happy. But there were little signs, behaviors, showing that he was in pain.” And soon that pain turned to sores on the most damaged back leg, which Christie worried could become infected. “It was a constant battle with antibiotics, pain medications. We were always soaking his sores, trying to heal them.” When Naki’o was one year old and still struggling, Christie knew it was time to try something new.

Christie began researching prosthetics. She heard of a company called OrthoPets that makes custom prosthetics for animals with great success. “It was fate,” she says. “They were exactly what I needed. It was a blessing that I came across them.” Raising $1,000 for the first leg was easy. “We put a jar up front at the vet clinic and lots of clients donated. They all knew Naki’o, knew his story, and they’d bonded with him at the clinic. The community really pulled together.” Then OrthoPets did a wonderful thing: The company donated the other three prosthetics!

The hind leg prosthetics were made first, one at a time, and Naki’o pretty quickly figured out how to walk around on them. “He became comfortable, was able to play outside and chase balls with less pain.”