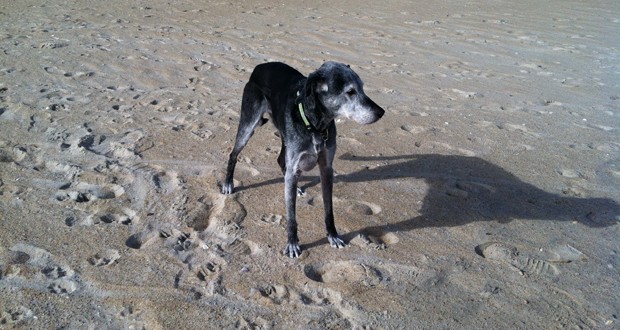 Only the Dog Knows for Sure

Ollie and I had just begun a walk along the shore of Atlantic Beach when we both spotted a trio of unleashed dogs. As we neared the pack, I tightened up on Ollie’s leash, knowing he’d be lunging to meet his fellow canine brethren. The first dog that approached growled and snapped at Ollie almost immediately. I could see what appeared to be the dogs’ human just a few steps away and thought for sure she would be calling for this dog to leave us alone.

I thought wrong. A toddler waddled up and started calling for the dog, which of course, the dog ignored.

Next up was another medium-sized dog and an adorable pup that couldn’t have been more than six months old. I walked right by their “human” and at this point I was giving her the ole stink eye. Of course I had sunglasses on so she couldn’t feel the full extent of my stink eye wrath.

The medium-sized dog approached and sniffed. Again, I tightened up on Ollie’s leash waiting for the dog to be called off. Nothing.

At this point, the little pup criss crosses and zig zags and nearly trips Ollie and I. Nothing. We continue to walk. The little pup follows. Not a single word from the human.

We continue to walk down the beach, this time with the little pup in tow. He runs ahead and nearly trips two ladies walking in front of me.  I continue to walk. Farther and farther we go and still no one is coming to get this pup! I turn around and see the human plop down in a beach chair with two others. Well surely she has no intention of getting this little pup.

Farther and farther we go. We are a good 100-200 yards away at this point when, of all people, the toddler comes waddling toward us calling the dog back!

All I can think is wishing I had the nerve to say, “It’s people like you who give the rest of us responsible dog owners a bad name!” I continue to walk with Ollie imagining what I might say to this woman upon my return. And then I just start to hope they’re gone when I walk back because I really don’t want a confrontation.

I wasn’t so lucky.

I see them in the distance and keep wondering, “Do I say something? Is there a way to be tactful about it? Would anything I say even make a difference?”

They suddenly light up and want to make small talk. Not what I had planned. I wanted to say my line and then walk away with a grin. I can’t continue to talk to these people! But they were nice, and I’m not a mean person, I just want people to be responsible dog owners. So I chat for a minute or two and then Ollie and I make our way back.

So instead of some snarky editorial, I want you, nice people, to simply know that it is extremely rude to let your dogs run up to people unattended. It’s dangerous for your dogs to run loose if they’re not under voice command. Luckily, Ollie is a very laid back guy, but there was no way to know that. He could have just as easily been hostile and there could have been a scuffle. Also, it’s dangerous to let a young pup wander that far away from you. Your toddler has the right idea. As long as she keeps it up, she’ll grow into a fine responsible dog owner. She could teach you a thing or two.