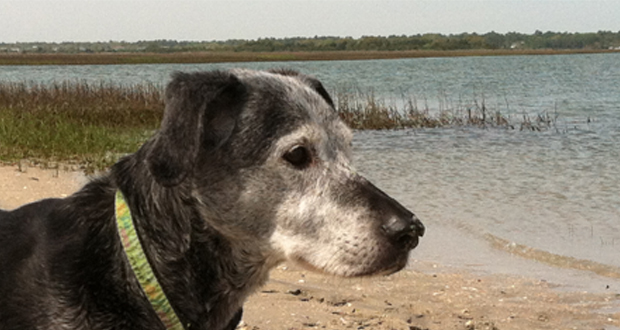 It’s been more than two months since my sweet Ollie passed away. Yes, he is the “Ollie” in OllieDog Media, the name of my company and the inspiration behind Dog Living Magazine. I haven’t had the heart or the strength to write this memorial to him until now and even now, the tears flow down my cheeks as I think of my first big love.

Ollie was one of those spur of the moment decisions. Yes, the ones we preach about avoiding. Owning a pet should not be a spur of the moment decision. I was young, I had always wanted a dog, and I told myself I’d just go to the shelter to “take a look.” When I arrived at New Hanover County Animal Control in December of 2000, there was a kennel full of two-month-old jet black puppies. I don’t remember how many but the story was that their mom was found dead lying on the side of the road and the puppies were picked up and brought in to the adoption center.

I had read somewhere that male dogs bond better with female humans and vice versa. I don’t have any evidence supporting that notion, and I’m not sure if I believe it now, but that is why I told the attendant, “Just pick one of the males and I’ll take it into the side room for some one-on-one time.”

When we got into the private room there was a jar of biscuits on the floor. This little pup went right over to the jar and nudged the lid open. “He’s smart!” I said to myself. Then he came bounding over to me. I knew in that instant I wasn’t leaving without him. I signed the papers and arranged to pick him up from the vet after he was neutered the next day. Then I went and checked out all the books I could find on puppy training. On the ride home from the vet he whined the entire time from the kennel in the back. My heart broke for him as I assured him everything was going to be alright. Once we got home, he pranced and stumbled around like any two-month-old puppy happy to be free of a cage. All the books I read recommended crate training and teaching the puppy to sleep in the crate at night so at bedtime, into the crate he went right beside my bed. I hadn’t even pulled the covers up when he started to whine. The books said to let him whine, but that only lasted about two minutes on me.

I pulled him into bed with me and this little precious pup settled in right next to me. All he wanted was a companion, and I guess I did too. Over the next six months we did almost everything together. I moved from Wilmington to Raleigh in early 2001. I took him to puppy training class and he wowed the other students with the tricks I had taught him. But as things happen in life, I was young, I became overwhelmed, and was struggling with some personal issues. Finally one day my mother asked me, “Would you like us to take Ollie?” I hesitantly said, “Yeah, I think so.”

In 2002, I made the move back to Wilmington and I realized I needed my Ollie to make the move with me. His grandma and grandpa had taken great care of him for the past six months, but he didn’t hesitate to jump back into life with his mom. Oh the times we had! He was my constant companion and as Forrest Gump would say, “We were like peas and carrots.” He would celebrate with me in happy times and comfort me in not-so-happy times. But of course, anyone with a dog knows that is just what they do. They love. Pure and simple. As the years passed I settled in with a boyfriend and we adopted two more dogs. I’ll never forget the summer of 2013 when I was living in Atlantic Beach for work and only coming home to Wilmington on the weekends. I was able to take take one dog with me and originally I thought it would be our youngest, Pecos. He needed to be exposed to more experiences, he was only 35 pounds, and he was my little snuggle bug. But Ollie was getting older, and I didn’t know which trip might be the last trip I would take with him. I decided it would be Ollie who would travel with me. He was always so excited to jump in the car at 6am Monday mornings as we made our way to Atlantic Beach. After work we’d take long walks on the beach and someone would always comment on what a handsome dog he was. We’d drive back to Wilmington on Fridays and do it all over again week after week. Those were treasured memories of just mommy and Ollie time that I’m so happy to have.

Over the years, the jet black hair was replaced with an ever-growing grey muzzle but he never seemed to slow down. At his 2014 check up, his vet said, “I wish every 14-year-old dog I saw was as in as good shape as Ollie.” Since he turned seven, I had always had special blood work done at each check-up. Some vets call it a “canine senior panel.” It helps to track any changes on the inside, that might show up before we would notice any symptoms on the outside. It was during his 2015 check up that the blood work showed something was not quite right. As the vet said, “The levels are not necessarily abnormal, but they are abnormal for Ollie based on previous years’ levels.”

A few more diagnostic tests were run and finally an ultrasound revealed he had an enlarged spleen. The vet said he was a ticking time bomb and recommended surgery to remove the spleen as soon as possible. If his spleen were to burst, he would bleed out and the results would be painful and most likely fatal. I was a nervous wreck about the surgery. I was terrified he wouldn’t make it through. The vet assured me that although every surgery carries risks, splenectomys are not uncommon and the real danger would be if she found a malignant tumor on the spleen. The hard part for me was that he showed no outward symptoms and was acting like himself. “How can my dog be sick? He’s acting normal. He’s jumping around. He’s being goofy.” I was still a wreck as I dropped him off the next morning. Very late that afternoon I got the call that the surgery had gone well and the good news is that he did not appear to have a malignant tumor, although we wouldn’t know until the tissue was tested. He was resting comfortably and I could visit later. A wave of relief swept over me. When I arrived at the vet’s office Ollie was lying down but he began his “welcome home” bark as soon as he saw me. I rushed to his side and told him, “Mommy’s here. You are gonna be alright. You are a brave boy!”

The vet smiled and said, “Well he obviously recognizes you and is happy you are here.” It was time for another dose of pain medication so I sat with Ollie as he drifted off into lala land for a good night’s sleep. I kissed him on the head and told him how much I loved him and that I’d be back to see him in the morning.

At 2am my phone rang. My heart sank as I realized there is only one reason my vet would call me at 2am. Before I even listened to the message, I knew my Ollie was gone. His heart had stopped and the vet did not know why. I think my heart stopped that day too.

A couple of weeks went by and although no autopsy was done, through research and some tests my vet’s best guess as to what happened was that Ollie died due to disseminated intravascular coagulation (DIC). But it really didn’t matter to me. All I knew is that my Ollie was gone, he passed away peacefully, and there was nothing I could do to bring him back.

Although in some way I still feel I failed him, the vet assured me that I did everything I could and what happened to him could not have been predicted or prevented. At least I was able to see him after the surgery and I’d like to think his last memories were of his mommy comforting him.

One lesson to take away from this is that blood work for senior dogs is so important. If it weren’t for the blood work, the vet would have never detected the enlarged spleen and Ollie could have faced a very painful, sudden death. I encourage all dog owners to do this. Yes, it costs a little extra, but what kind of price would you put on your dog’s life?

I’m so grateful for the nearly 15 years I had with Ollie and I still think of him every single day. He was the love of my life. I was young and stupid when I adopted him, but he showed me what it meant to truly care for another creature. I’d also like to think he taught me how to be a good dog owner. Now, go hug your dog.