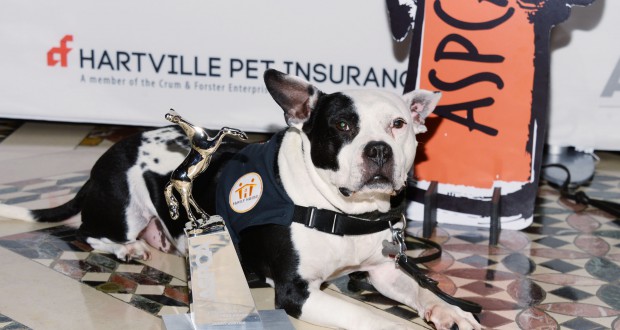 A group of outstanding animals and people were honored at this year’s ASPCA® (The American Society for the Prevention of Cruelty to Animals®) Humane Awards Luncheon in New York City. The ceremony recognizes animal heroes who have demonstrated extraordinary efforts as well as individuals who have shown great commitment to animal welfare during the past year.

“The 2014 Humane Awards winners represent  stories of tremendous courage and determination, but also remind us how important animals are to our lives, and the care and protection we can give them in return,” said ASPCA President & CEO Matthew Bershadker. “We are proud to honor these winners, and hope their journeys inspire more humane action across the country.”

Jonny Justice was one of 49 dogs rescued from unimaginable cruelty as part of the 2007 Bad Newz Kennels dog fighting investigation, which resulted in the conviction of NFL quarterback Michael Vick and others. The ASPCA played a central role in the investigation, assisting with the recovery and analysis of forensic evidence from Vick’s property, and leading a team of certified applied animal behaviorists to evaluate the rescued dogs. A black and white pit bull, who had little or no positive interactions with people or other dogs, Jonny was given a second chance when he was adopted by his foster parents, Cris Cohen and Jennifer Long. As Jonny adjusted to life as a typical pet, it became clear that he loved interacting with children. In 2008 he found his true calling as a therapy dog, and these days spends much of his time offering love and support to terminally ill children receiving medical treatment (and their families). Jonny is also a champion for literacy, and has participated in programs, where children practice their language skills by reading aloud to him. The tale of Jonny’s inspirational comeback from the horrors of dog fighting to work as a therapy dog has traveled far and wide, even inspiring a line of plush toys that extend his ability to touch children across the country.